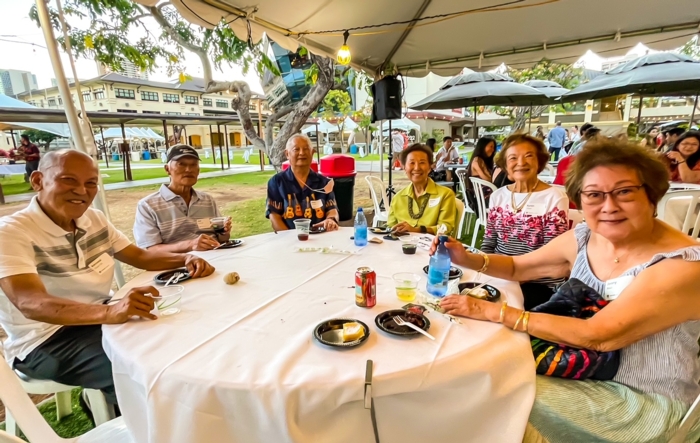 Hey Colin,
Missed you at the reunion dinner, we had a nice time.  As the most senior class we got to go first to the food line.  Think that I had about four beers to hold up our reputation as resilient.  There were individual recognitions of class contributions.  Class of ‘72 blew everybody away with a contribution in the neighborhood of $1.4 M (it appeared that it did help that a class member is Steven Ai of City Mill.) Total for the night was about $2.8 M.  Am thinking that we should work on an initiative to get a high participation percentage for our class, even if the individual contribution is $10.

Participated in Touch of Iolani a couple of days after the reunion dinner, not as guests, but as volunteers at daughter’s Robynne’s booth Fête.  I was in charge of deep frying chicken in two giant woks.  Lines were long.  Had to ask one of the boys to go find me a beer or two.  Did not see any 62ers but did encounter a number of mates from other classes.  We will be up again in five years, so do plan to be there, God willing, and beer lasting till then.  Suggested to Pat Tom that if submitting the attendance list in cursive, a simple elimination of the dots over the “I’s” in my name would have resulted in prominent Chinese name , Mau, to make it a clean Pa’ke sweep!  And you gotta know that the group does does understand the nuances of ‘ …a free lunch…’.    Got a lot of congratualary comments regarding daughter Rob’s James Beard award.   Had to advise all that “…behind every successful child are generally two very astonished parents…”.   So overall a good week with hopes of future participation.

Visited with Faith Shibuya yesterday, she is home, doing well, and continuing rehab.  Responded to an inquiry re her status from Pui and Evie at the dinner, advising that she appears to be doing well.  They both asked that I convey their well wishes to her, which I have done.   We are in touch with Faith’s daughter Kris, and have volunteered to assist in any way possible.  Will keep you advised.

Still trying to figure out how to get my ass back on the course, but too many things on the agenda at the moment, mostly related to Jenn’s craft fair in November, if it will be live or just virtual, as it has been in the last two years.